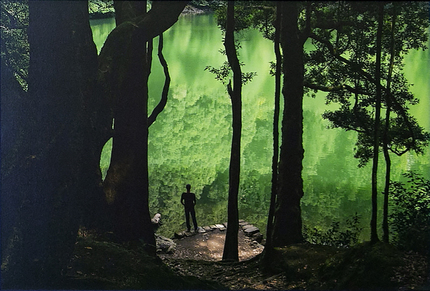 In the Azores, it is common to experience what feels like all four seasons in a single day. For “Weather Station,” Manuela Marques and Sandra Rocha inhabit the roles of artist, meteorologist, and geologist in order to explore the islands’ topography and history. In the exhibition’s first room is Rocha’s Escuta (Listen) (all works cited, 2019)—a wall-spanning grid of sixty photographs, taken during a three-minute window, of the white and blue swirls of coastal waters. Projected on the opposite... 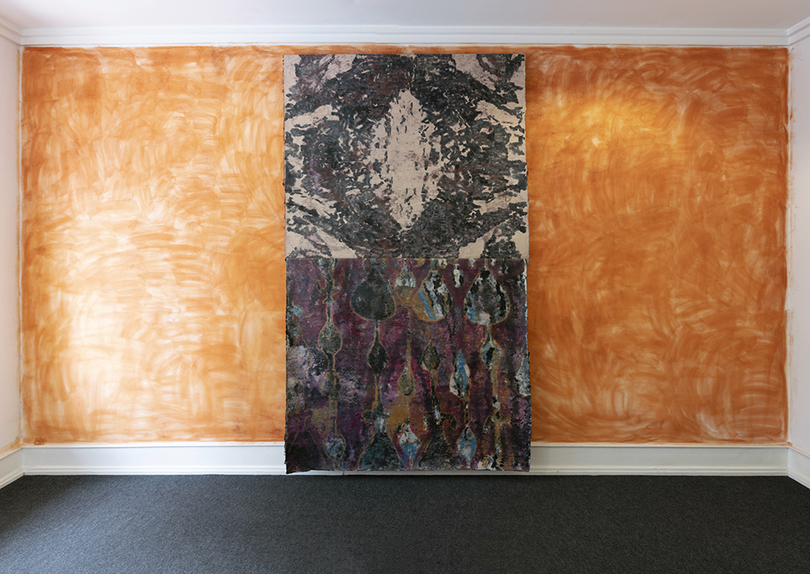 Paulo Brighenti, Cascata (Waterfall), 2019,
For “Cascata” (Waterfall), Paulo Brighenti has convened encaustic paintings and roughly molded sculptures in variations of dark brown and sienna. Two somber paintings, Bacchus #1 and #2, 2019, show the face of a man sticking out his tongue. Bacchus #3 and #4, 2019, rendered in concrete, are installed on plinths nearby; what unrolls from the mouths of these disfigured, fossilized skulls are not tongues but gently perched copper leaves. The reference ... 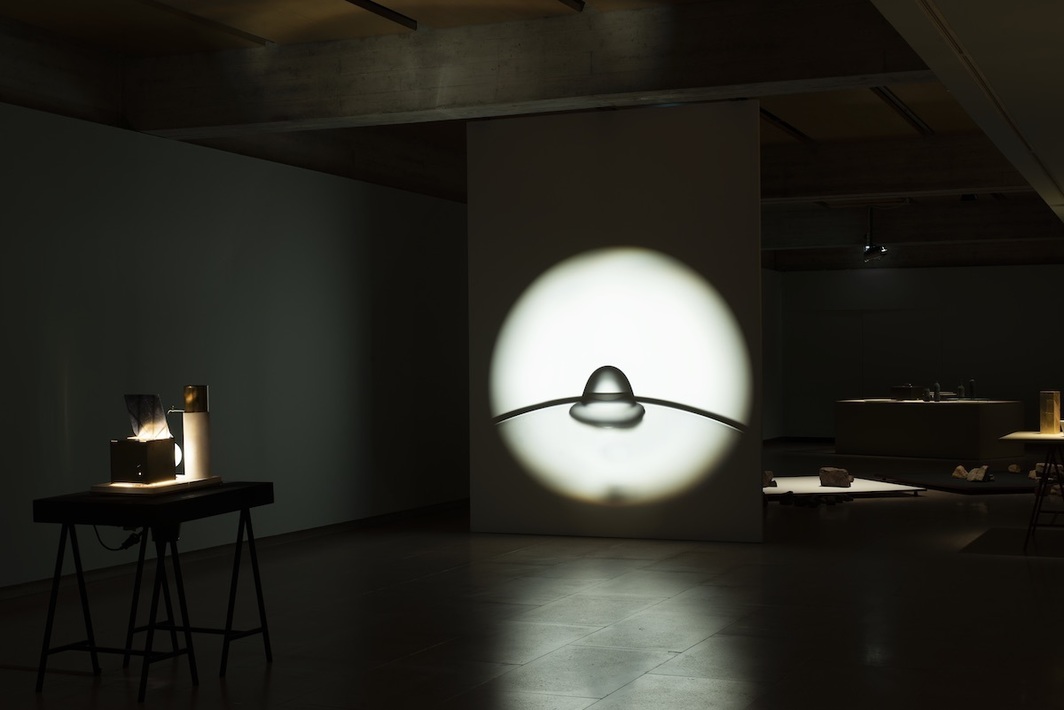 “The Pyrgus from Chaves,” Francisco Tropa’s latest exhibition, is set in a dark, vault-like gallery, where an eclectic array of small figurative sculptures is assembled on asymmetrically arranged tables. A selection of Tropa’s works since 2006 are featured alongside artifacts found in the Roman baths of Chaves in northern Portugal, a site exceptionally preserved by a landslide that buried it around the fourth century CE and rediscovered in 2016.
Tropa collaborated with archaeologist Sérgio Ca... 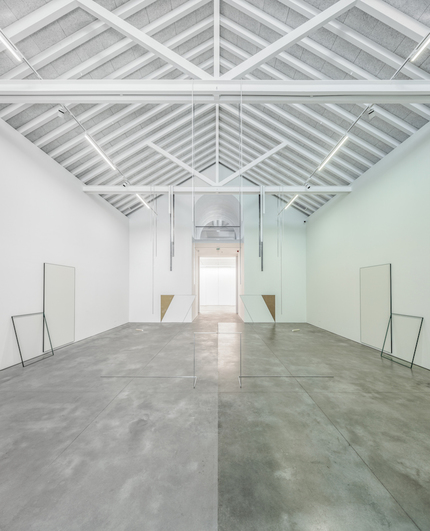 Entering Marcius Galan’s installation Exercício de divisão (Exercise of Division) (all works 2018) feels like stepping into a mirror. In the white industrial space of the gallery, various objects surround the visitor: minimal wooden frames slanted against the wall or arranged on the floor; glass; bent iron rods that hang from the ceiling’s beams or twist toward it from the floor. Galan’s symmetrical environment splits the hall in two, creating one big mirror in trompe l’oeil. Upon closer insp... 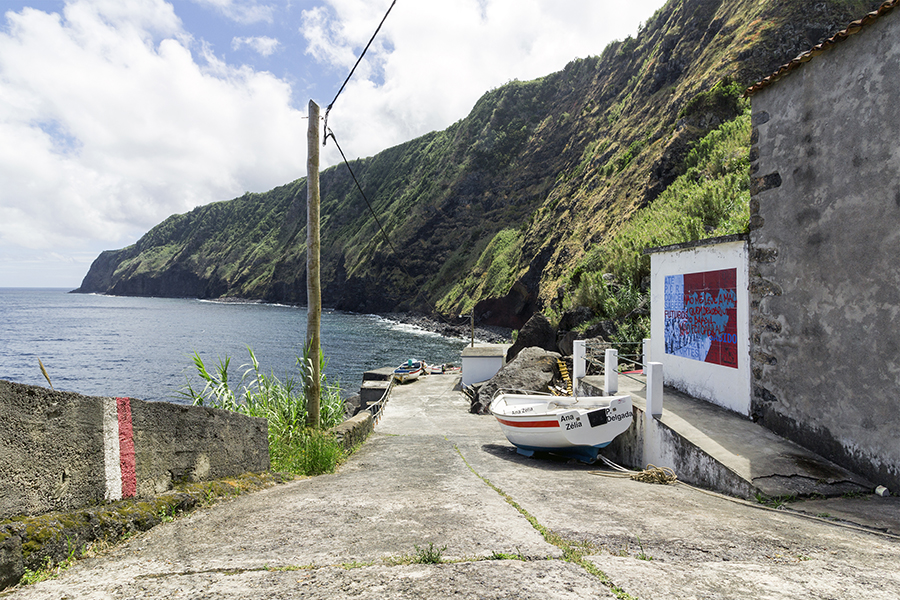 Welcome to the Centre of the World: Around the Azores’ Walk & Talk Festival

A roughly three-hour flight west of Lisbon, the Portuguese Azores archipelago comprises nine volcanic islands lush with forests, streams and birdlife. On the main island, São Miguel, black and white baroque and colonial architecture punctuates an otherwise rural setting of emerald landscapes, hydrangea-lined roads and panoramic ocean views. That is the backdrop for the Walk & Talk festival, founded on the ideas that all things are based on these two actions, and that the Azores are – why not?... 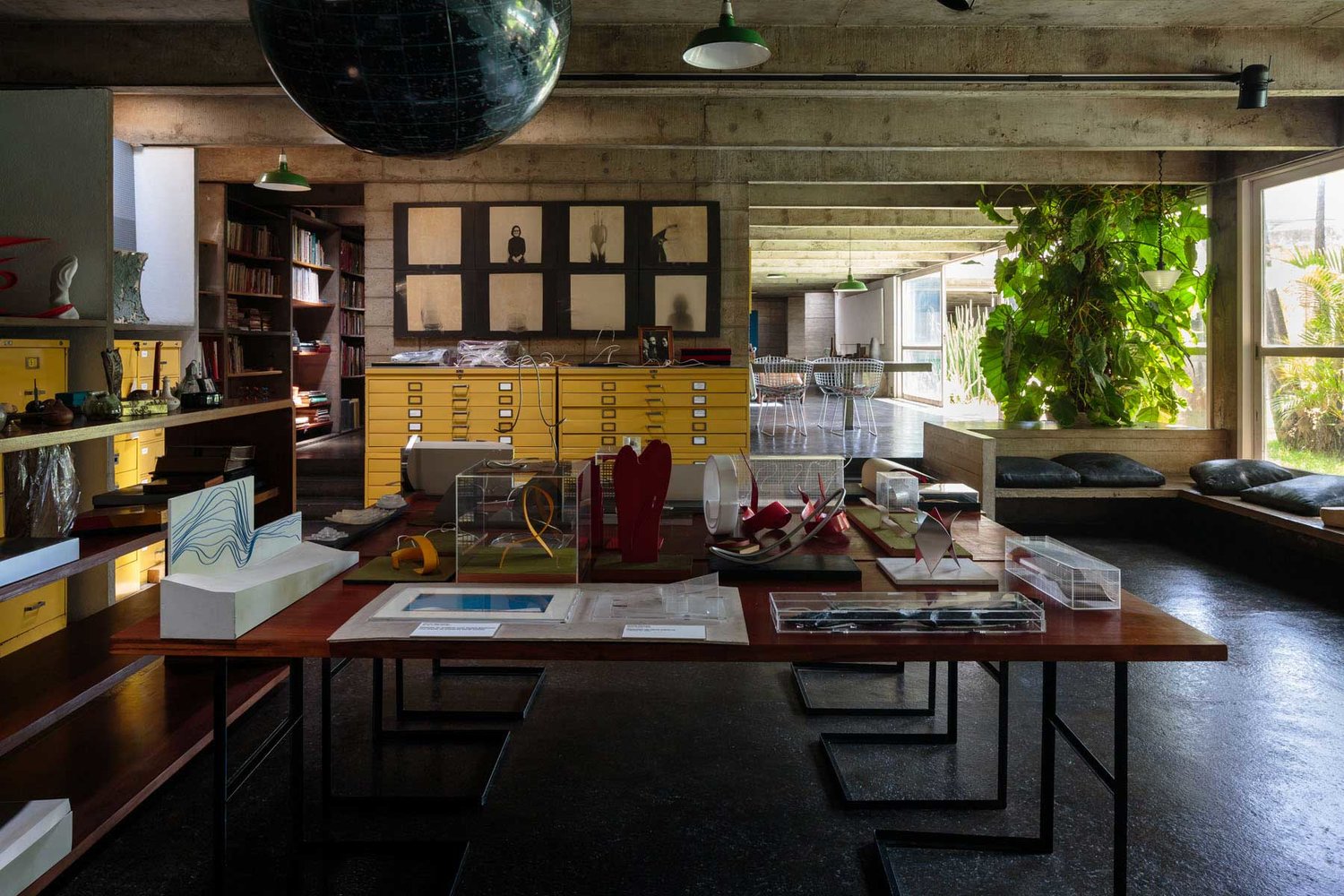 In a leafy São Paulo suburb, the brutalist home and studio and of Japanese Brazilian artist Tomie Ohtake
Japanese-born, Brazilian artist Tomie Ohtake (1913-2015) is celebrated for her large-scale public art installations and abstract paintings, characterised by strong, monochromatic colour streams. Visitors to São Paulo today can experience Ohtake’s striking works on display through her many public sculptures scattered throughout the city, at The Tomie Ohtake Institute and, in the near future... 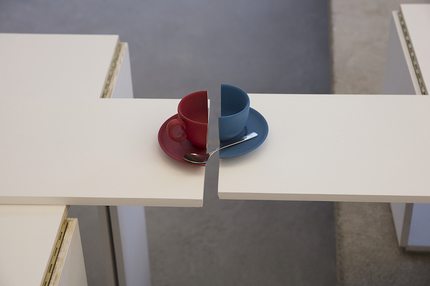 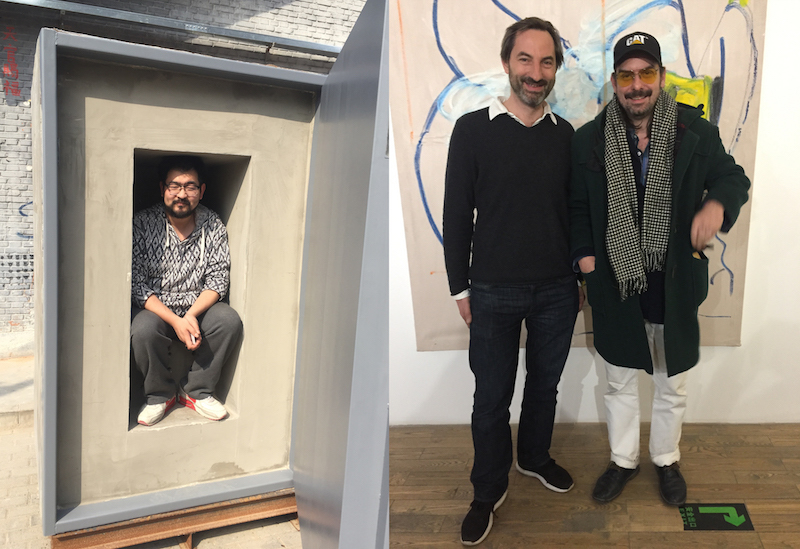 “IT IS THE SECOND EDITION, but really it feels as though it’s the first,” said Amber Wang, this year’s director of Gallery Weekend Beijing, or GWBJ. She’s eager to break the city’s recently uncharismatic relationship with the art world. And it seems to be working, as enthusiasm abounded across the participating twenty-two galleries in the 798 and Caochangdi arts districts as they welcomed an international crowd of curators, dealers, and collectors who came through, readying themselves for Art... 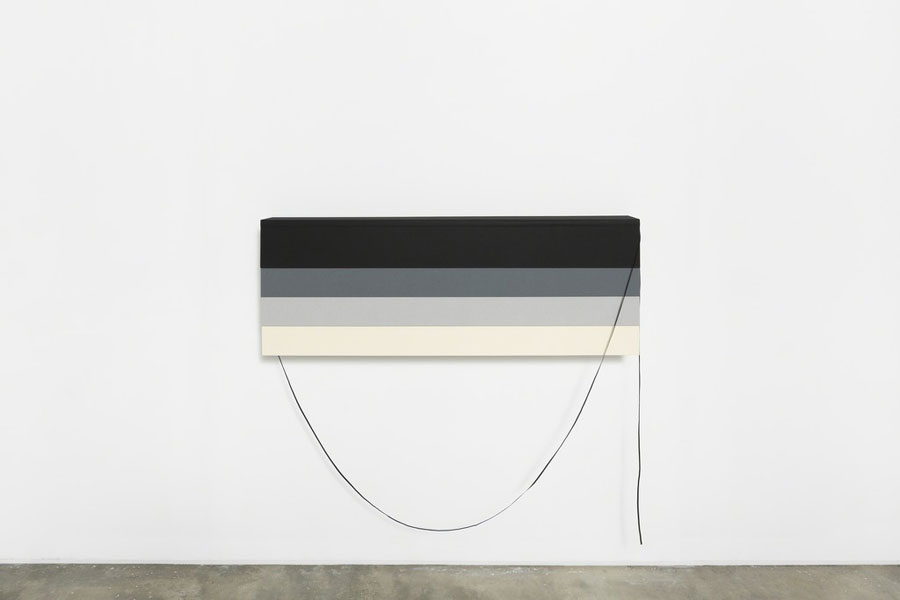 Critic’s Guide to the Best Shows in Lisbon

Critic’s Guide to the Best Shows in Lisbon 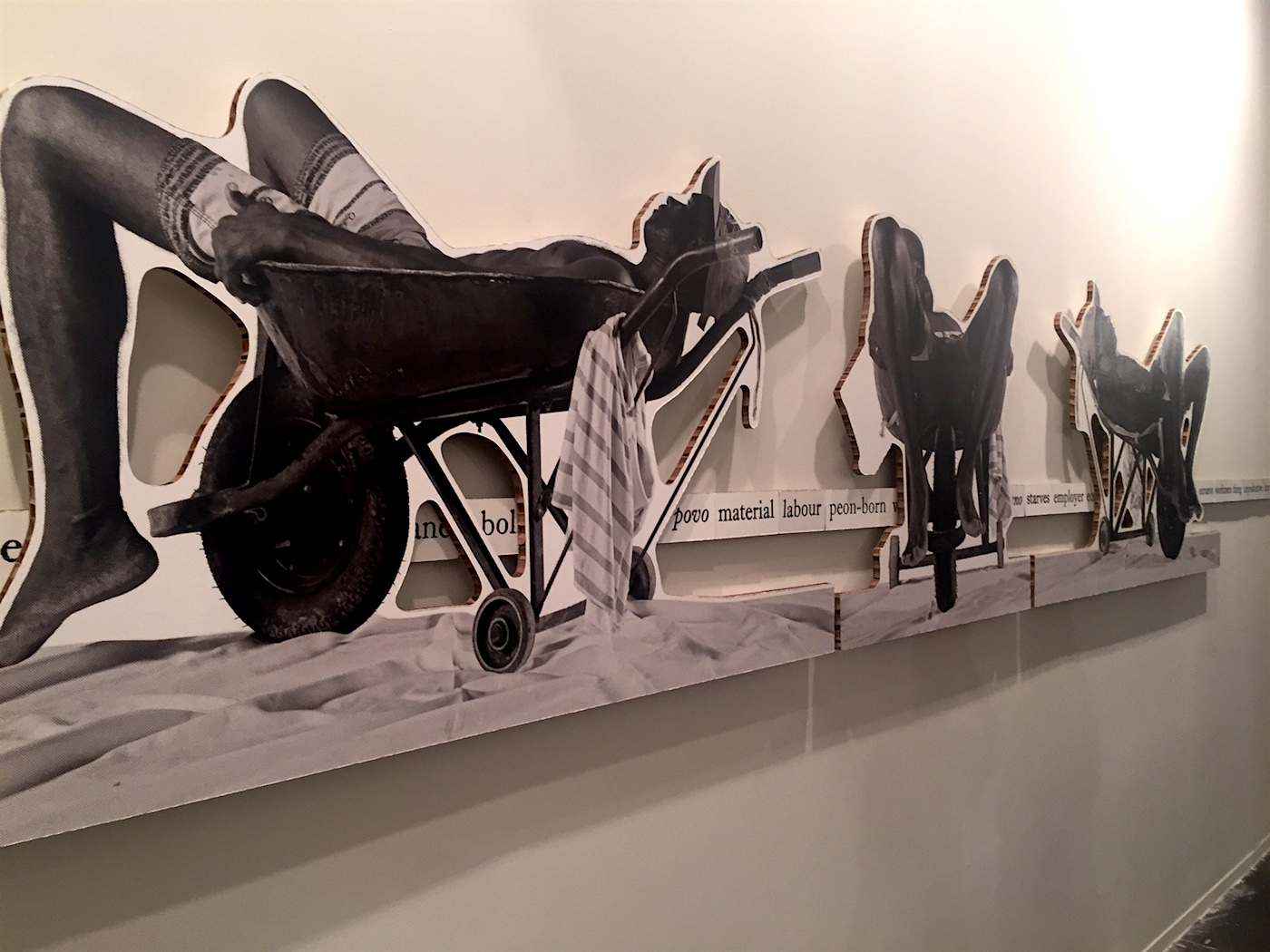 SÃO PAULO — SP-Arte is considered one of the most important art fairs in Latin America. I cannot speak for previous years, but the current edition, featuring 164 exhibitors, includes a spectacular array of works, from Brazilian and international artists, positioning the fair on par with other global brands.
The country has very high taxes on importing artworks — according to multiple gallerists at the fair, up to 50% (although business at the fair benefits from a 25% waiver) — but this didn’t... 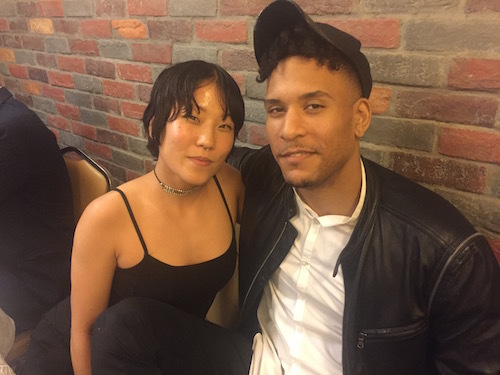 “CAN YOU MAKE IT DISAPPEAR?”

“Impossible! It is exhibited in a gallery.”

Yolanda Choy Tang, a former reporter, was talking to a friend who saw her in a Wolfgang Tillmans photograph holding up a microphone in a meat market (Hong Kong TV Reporter, 1993). The photo was part of a solo show at David Zwirner’s new Hong Kong outpost in the H Queen’s Building. “It was twenty-five years ago!,” said Tang to Tillmans, who came to greet her during the vernissage. Tillmans had just finished lecturing the ... 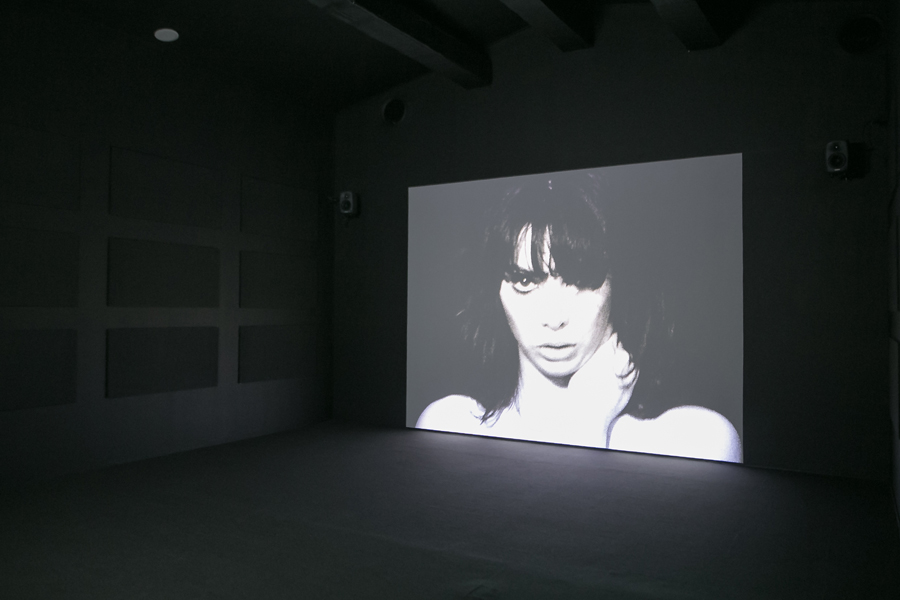 February in Manila, home to Art Fair Philippines since 2013, is becoming increasingly attractive as a gathering place for those interested in art from Southeast Asia. Last year, Bellas Artes Projects – a non-profit foundation in Bataan, initiated in 2013 by patron Jam Acuzar – opened a Manila offshoot, the Bellas Artes Outpost, in the Makati area of the city. Coinciding with the art fair, a touching show by the late American artist Bruce Conner, curated by Diana Campbell Betancourt, opened ac... 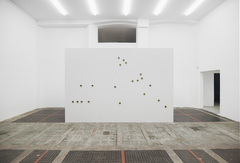 Mika Tajima
Central to Mika Tajima’s current exhibition is Force Touch (Manibus, 1) (all works 2017), a large wall facing the gallery’s street entrance and blowing air from several gold-chromed stainless-steel spa jets. Although these allude to the meridian points of the human body, it is their alternating gushes of air—irresistible to some visitors’ hands—that suggest life energy, in remarkable contrast with the sterile coldness of the white surface. Pranayama, D, a wooden bust reminiscent o... 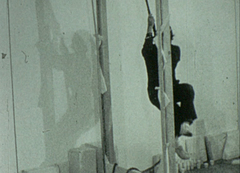 Wolfgang Stoerchle, Wolf’s Master of Fine Arts Show, 1970,
Before he became an essential figure of the 1970s Southern California art scene and professor in the legendary Post-Studio program at CalArts, Wolfgang Stoerchle studied painting at the University of California, Santa Barbara (UCSB). There, he experimented with a series of performances and videotapes prior to receiving his MFA in 1970. Last year, Alice Dusapin, one of the founders of this cooperative space, unearthed from the artist’s... 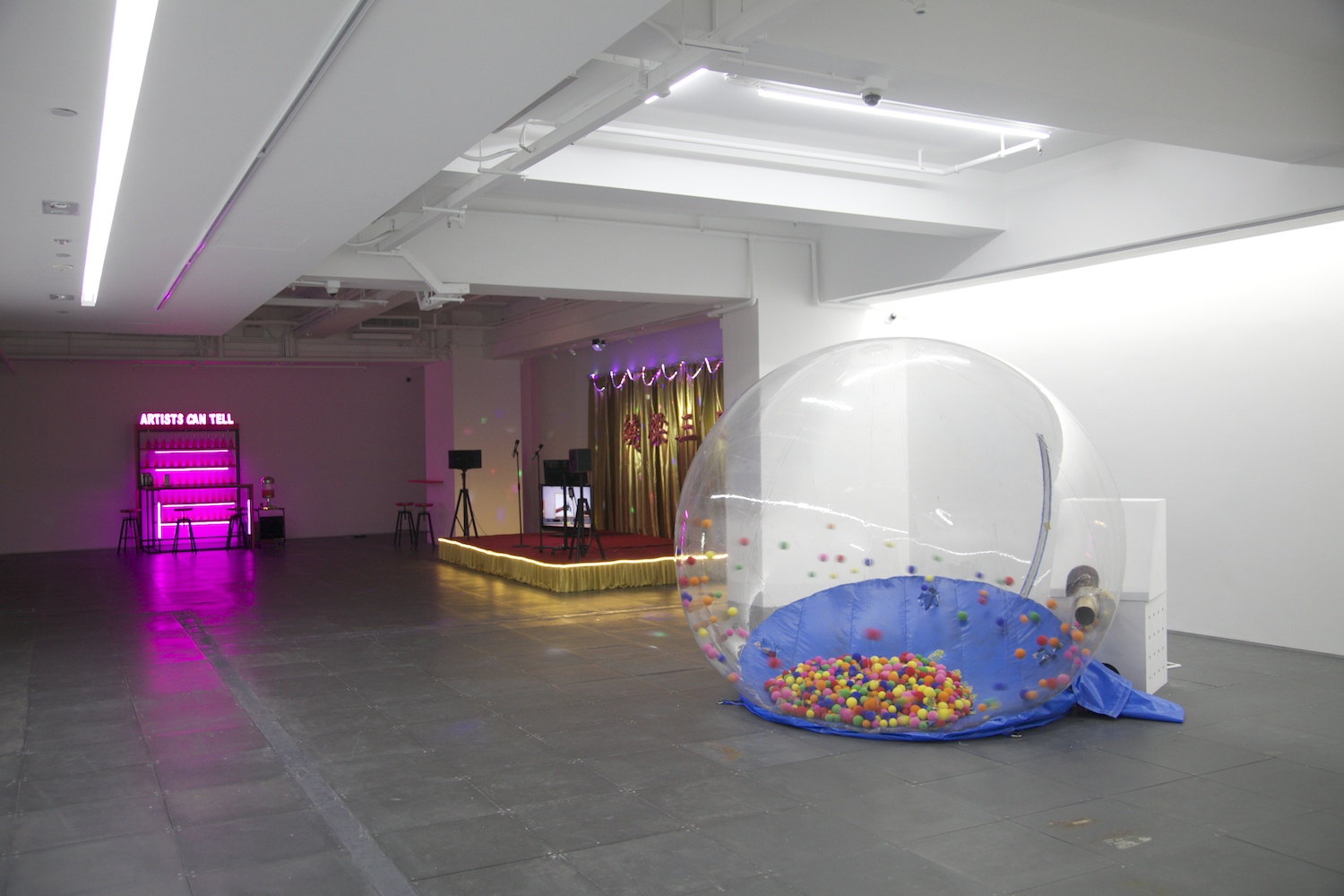 Mak Ying Tung is a multidisciplinary artist with a wry sense of humour. Born in Hong Kong in 1989, she organised her first exhibition in 2012 at the School of Creative Media in her hometown. Featuring a range of installations involving stationery, highlights included “Everyone Makes Mistakes”, a compass that traced a square, and “I can’t live without you”, a calculator missing its equals button.
Following this, Mak developed her witty aesthetic further. In 2014 she got her first white cube so...